Is the Ground Zero Mosque the GOP's Way of Gaming Google?

We all know that politicians love misdirection. If something comes out that isn't very flattering, the spin machine goes into overdrive to manufacture some kind of controversy or glurgy display of PATRIOTISM! to distract people from what's really going on. The political machine that Turd Blossom put together is especially good at this. On several occasions, though, I've noticed that the GOP regularly gets up in arms about something that is very closely related to the story they're trying to keep buried. I first noticed this kind of correlation during the previous administration when Dubya gave the soldiers in Iraq a big plastic turkey during the same week that his Republican allies in Congress voted to slash benefits for Veterans.

The current pointless battle filling time on cable news and clogging up my Google Reader is the mosque at Ground Zero. The story that's getting buried is the fact that last Thursday the Republicans blocked a bill to provide health care for the Ground Zero emergency workers. It occurred to me that maybe these correspondences between embarrassing and pointless but juicy stories may not be a total accident. With so many people getting their news online these days, maybe damage control includes making sure that Google and other search engines have plenty of nonsense to turn up before the story you want to keep quiet pops up.

To test my theory, I did a couple of Google searches. The first was for "Ground Zero." Here's what I got: 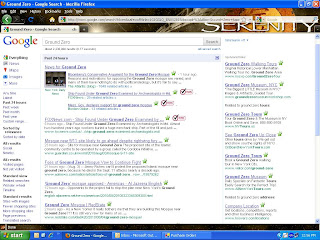 As you can see, every single link turned up has to do with the mosque that those dirty A-Rabs are going to build at Ground Zero, where they will no doubt give out free gay abortions to illegal immigrants thanks to socialist medicine. Well, maybe I wasn't being specific enough. Let's try "Ground Zero Workers:" 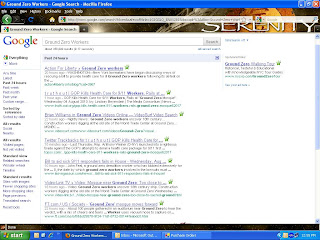 This one actually turns up a few stories about the bill that the GOP blocked, but the mosque still shows up. Let's try "Health Care Ground Zero:" 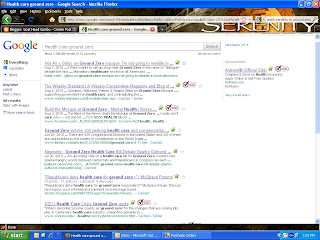 You'd think this would actually be the best search, but the top four are still about the Mosque. The hits that actually seem to relate to the GOP effort to deny health care to 9/11 heroes, only one seems to be to an actual news source.

Replacing "Ground Zero" with "9/11" turns up slightly better results, but not by much. Most of the links have nothing to do with either story. If the GOP are trying to game Google, it seems to be working.
Posted by Steve Johnson at 12:56 PM 2 comments: