Obama's Black Panther (and other) Connections

Like many of you, I was SHOCKED and HORRIFIED when a friend forwarded me the following SHOCKING PHOTOGRAPH of our "so-called" President of the United States. 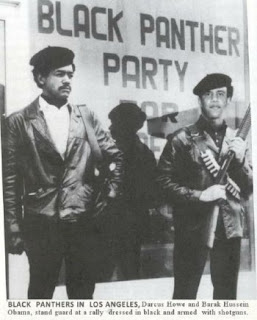 The photo shows Barak ADOLF HUSSEIN DRACULA OBAMA (approximately 5-8 years of age, based on our best guess as to the photo's date) holding a shotgun outside of a Black Panther rally in the 1960s. (Note: The photograph's "caption" is incorrect: the man IDENTIFIED as Darcus Howe is actually Panther party LEADER Bobby Seale).

I was MORTIFIED! I mean, it was bad enough that we'd allowed a Kenyan NAZI Fascist COMMIE to be elected to the highest office in the land, but a BLACK POWER ACTIVIST? Although I KNEW I wouldn't like the answer, I decided to search around to see what other "incriminating" photos lay in the President's past. What I found was shocking. 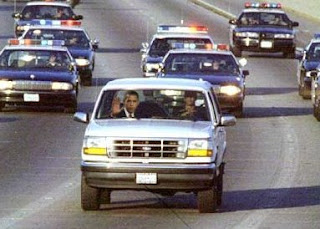 This one SHOULDN'T "surprise" anyone. 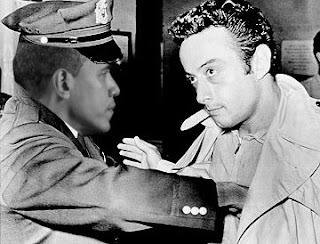 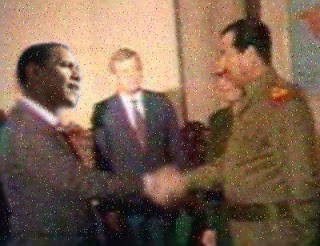 This "photo" shows OBAMA meeting with his NAMESAKE in the 1980s 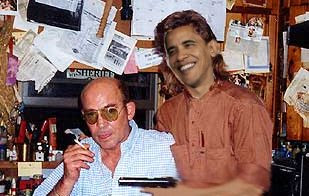 I always "thought" that Hunter S. Thompson's death was suspicious. Now we KNOW THE TRUTH. I will admit that the MULLET is a clever disguise. 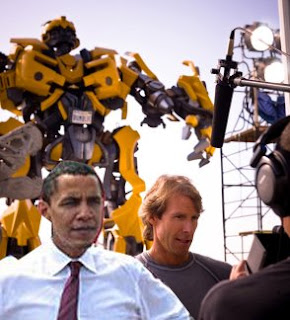 I'm not sure "how" OBAMA was involved in Transformers 2, but it makes PERFECT SENSE! 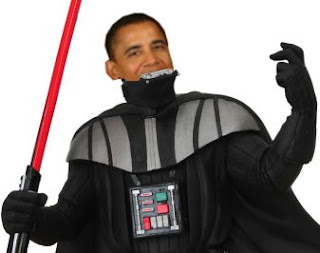 I suspect that this PICTURE may be a "fake." Then again, you never know...
Posted by Steve Johnson at 6:50 PM No comments:

Ahoy, maties! Even the landlubbers know that September 19 is International Talk Like A Pirate Day. To celebrate, I've put together this list of pirate (or at least nautical) themed songs.


Reliant K, "The Pirates Who Don't Do Anything" (Veggie Tales cover)


The Lonely Island featuring T-Pain, "I'm On A Boat"


George Harrison, "A Pirate's Life For Me"


Couldn't find a video for: Willie Nelson, "The Bob Song"
Posted by Steve Johnson at 12:53 AM No comments:

Email ThisBlogThis!Share to TwitterShare to FacebookShare to Pinterest
Labels: Music

Rapper Kanye West was forcibly removed from a Cartoon Network studio earlier today after he allegedly molested actor Seth Green during a taping of Robot Chicken. "We'd invited Kanye to guest as the voice of Rubic the Amazing Cube on an episode we were working on," said Matthew Senreich, the show's co-creator. "Everything was going pretty well and all of a sudden the guy just went crazy and started doing stuff to Seth."

"I wasn't really phased when he whipped his junk out during the taping," said a shaken Green. "I mean, I've worked with Marsters, so I'm used to that kind of thing." Green is referring to fellow Buffy the Vampire Slayer star James Marsters, whose penis-based "let me show you Spike's spike" routine was a consistent hit with the show's cast and crew. "Then I got little nervous when he started walking towards me saying 'it's gonna get you,'" continued Green. "When he started trying to rub his junk all over me, that's when I called security."

Today's incident was not the first time West has caused an awkward situation for a star of the Austin Powers movie series. Just yesterday, he confused and embarrassed Beyonce Knowles at the MTV Awards with his interruption of Taylor Swift's acceptance speech. Series star Mike Myers was similarly flabbergasted in 2005 when Kanye speculated about then-President George W. Bush's racism at a benefit for victims of Hurricane Katrina. Less publicized was West's outburst at UCLA's graduation ceremony last May. In the middle of Verne Troyer's commencement speech, West wrestled the microphone away to deliver a lengthy diatribe on the merits of midget wrestling.

The purpose of West's bizarre public outbursts so far remains unknown. It is likewise unclear why West's behaviour seems to be targeted at members of the Austin Powers cast. Given the increasing frequency of West's antics, other actors who appeared in the movies are preparing for the eventuality of 'West situation.' "Just let that little fucker try something with me," said Robert Wagner, who played Dr. Evil's henchman Number Two in all three Powers films. "I'll teach him why you don't fuck with Jonathan Hart."

It is currently unclear whether or not Mr. Green will be pressing charges. When asked about the incident, West's publicist and agent refused to comment.
Posted by Steve Johnson at 4:25 PM No comments:

Many people assume that the speech given to our nation’s school children by President Obama actually followed the transcript released by the White House, and that the footage aired by most major news networks was of the actual speech. In fact, Obama’s true “Back to School” speech was very different. Goat Head Gumbo has acquired a partial transcript of the actual Obama speech, which is reprinted below.

PRESIDENT OBAMA
Hello everyone – how's everybody doing today? I'm here with students at Wakefield High School in Arlington, Virginia. And we've got students tuning in from all across America, kindergarten through twelfth grade. I'm glad you all could join us for today’s indoctrination.

When I was young, my family lived in Indonesia for a few years. The school I went to there is called a “madrasah.” Now I know that’s kind of a funny name, but I learned a lot of important things there. For example, I learned that there is no God but Allah and that Mohammad is his prophet. I also learned that those of us who are righteous in the eyes of Allah must wage Jihad on the capitalist imperialist pig-dogs of America. This valuable lesson would eventually lead to pursue a career in politics, so that I could destroy America from within.

I decided as a youngster, not much older than many of you, that the best way to destroy American society was to attain the highest post in the land, namely President of the United States. Moving to America was the first step in this plan, but there was a lot more to do. For instance, I had to hide all traces of my Kenyan birth. That meant forging a birth certificate and adding a birth announcement to every single archive edition of several Hawaiian newspapers—including microfiche editions. I won’t kid you: it was a lot of work for a ten-year old. After that---

PRESIDENT OBAMA [Quizzically]
Hey, I wonder who that is at the door. Let’s go find out!

Look Kids! It’s my old friend Sally the Socialist Squirrel. What are you doing here, Sally?

SALLY THE SOCIALIST SQUIRREL
I heard you were giving a speech to the kids of America and thought I should probably interrupt before you bored them to tears with the story of how you became President.

PRESIDENT OBAMA [Sweating profusely]
Haw! Haw! Haw! That’s a good one, Sally! You’ve got pretty good timing, thought, because I was just about to tell the kids how working hard in school got me into Harvard, which is of course where you come into the story!

SALLY THE SOCIALIST SQUIRREL
That’s right, kids! I’m a professor at Harvard, and like most East Coast Liberals, I’m a raging socialist! From the moment I first met President Obama, I knew he was just the Muslim terrorist we socialists needed! If we could only get him elected President, we could steal money from well-deserving inheritors, Wall Street geniuses, and other hard-working types through taxation and then redistribute the wealth to a bunch of shiftless, lazy, welfare moms. If we were lucky, we could even give them all free health care!

PRESIDENT OBAMA
Sally took it upon herself to introduce me to all kinds of important people, like Albie the Abortion Ape, Gary the Gay Marriage Gazelle, Bill Ayers, and Franz the Facism Fox, just to name a few. All these new friends eventually helped me get elected President of the United States, but I couldn’t have done it if I hadn’t stayed in school. So take it from me, kids, if working hard in school can help somebody like me—a mixed-race, fascist, gay-loving, baby-killing, socialist, Muslim terrorist from Kenya—get elected president, imaging what studying and working hard can do for you--especially you honky-ass crackers out there!

Now, before I get back to the task of destroying our nation, there’s just one more thing I’d like you to do. GAZE UPON THE HYPNOTIC POWER OF MY EVIL EYE AND REPEAT AFTER ME: OBAMA IS THE ONE TRUE LEADER—

[Transmission Interrupted, presumably through the heroic efforts of Glen Beck (God rest his sanity)]
Posted by Steve Johnson at 8:17 PM No comments:

The Urban Dictionary defines Slactivism (they spell it with a "k," but that seems like a lot of extra work) as "The act of participating in obviously pointless activities as an expedient alternative to actually expending effort to fix a problem." Wikipedia cites awareness bracelets, internet petitions, and magnetic car ribbons as a few examples. I first read the term at Snopes.com several years ago, but I'm too lazy to dig through the site (and it's annoying pop-ups) to find the article. Basically, it's doing something that takes very little effort and is ultimately useless, but makes us feel like we're doing a good thing.

Perhaps my favorite example of Slactivism is the "repost this" meme. You know, the messages that say something like "I think it's wrong to use midgets to club baby seals. If you agree, please repost this message." The best thing about these memes, in my opinion, is their paradoxical nature. On the surface, they make it seem like we're taking a moment out of our obsessive narcissism in order to make the world a better place. At the same time, the idea that the world is going to change because you posted something to Facebook is hubris at its most absurd.

When a particular "repost this" message show up enough to annoy me, I'll change the wording a bit to make it stupid before reposting, mainly just to see if anyone notices. Because the internet makes it incredibly easy to do really retarded things (and because I often get bored at work), I've decided to start posting a new (and dumb) "repost this" meme to Twitter, theoretically on a daily basis. Check them out at https://twitter.comSlactivismDaily. And if you agree with me, please repost.
Posted by Steve Johnson at 7:20 PM 2 comments: