Today Vox posted some Bingo cards to use with tonight's debate, but their cards are reasonably fair, so I modified one of their cards that you can give to your opponent to rig the game in your favor just like the two major parties have done. 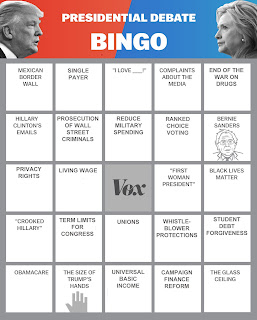 Posted by Steve Johnson at 12:38 PM No comments:

The states from the last two installments are beyond solid. Most of them have historically gone to the same party except in unusual circumstances like the party realignments during the Civil Rights Era, the Reagan Revolution, or the elections where there was a third-party candidate who actually got enough votes to play the spoiler. This time around, we'll look at the states that are solidly but not suicidally loyal to one party or the other. These states have won by an average margin of 10-15% in the last five elections, so if both of the third party candidates with some name recognition get votes consistent with their poll numbers and most of the votes going to both Stein and Johnson are siphoned off from a single party, there's a chance the state can flip. We'll start with the solid blue states, since there are fewer of them.

Maine
Favored Party: Democrats
Electoral Votes: 4
Average Margin: 13.5%
Current Prediction: Clinton by 11.8%
Flips: From before the Civil War until 1988, Maine was a reliably red state, only going to the Democrats in 1912, 1964, and 1968. Since 1992, the Democrats have taken the state in every Presidential election.

Kentucky
Favored Party: Republicans
Electoral Votes: 8
Average Margin: 14.58%
Current Prediction: Trump by 10.2%
Flips: Kentucky is another of the old "Southern Democrat" states, but it flipped to the GOP a little earlier than most. Since 1956, it's gone to the Republicans in all but 4 elections: 1964, 1976, 1992, and 1996. Unless Ross Perot decides to run, it's unlikely Hillary will repeat her husband's wins here.

Mississippi
Favored Party: Republicans
Electoral Votes: 6
Average Margin: 13.28%
Current Prediction: Trump by 4.7%
Flips:  Like most southern states, Mississippi loved the Democrats until LBJ came along. Since 1964, Carter is the only Democrat to win the state's Electoral Votes (though George Wallace did win the state in 1968 as an Independent candidate).

Montana
Favored Party: Republicans
Electoral Votes: 3
Average Margin: 12.86%
Current Prediction: Trump by 6.8%, though this is one of the states where Johnson is polling above average (13.8% when I looked all these numbers up).
Flips:  Montana kind of waffled back and forth for its first 60 years, but since 1952 the Democrats have only won it twice: 1964 and 1992.

South Carolina
Favored Party: Republicans
Electoral Votes: 9
Average Margin: 11.66%
Current Prediction: As of about a month ago, the polls only showed Trump up by 1.9%, so there's a decent chance that Trump's unpopularity may outweigh historical trends here.
Flips: It's the south, so with the exception of 1976 South Carolina has gone to the GOP in every election from 1964 on.

Tennessee
Favored Party: Republicans
Electoral Votes: 11
Average Margin: 10.24%
Current Prediction: Trump by 10%
Flips: Like Kentucky, Tennessee turned it's back on the Democrats earlier than most southern states, going the Republicans in the 1952 election. Since then, the Democrats have taken the state 4 times: 1964, 1976, 1992, and 1996. Clinton's success in the state didn't carry over to his VP, who lost Tennessee in 2000 despite it being his home state.

Support me on Patreon!
Posted by Steve Johnson at 4:14 PM No comments: