Let's Talk About Superdelegates And Stop With The Clickbait

Today my feed is full of stories about the DNC "awarding superdelegates" to Hillary Clinton. All the headlines suggest that something shady's going on, and all the links go to clickbait websites masquerading as lefty news outlets (USUncut, AddictingInfo, and similar sites). I'm the first to admit that by all appearances the DNC is manipulating the primary race in Hillary Clinton's favor. However, "awarding superdelegates" is not one of those things, because saying the DNC is "awarding" superdelegates to Clinton is a lot like saying that CNN is "awarding" Florida to a nominee on the night of the general election. It merely means that based on the information available, the DNC believes that these superdelegates will go to Clinton. Just as CNN has no power to decide who gets Florida's electoral votes, the DNC has no power (well, no official power, but we'll get to that) to decide who the superdelegates vote for.

As you probably know, delegates in a primary election are a lot like electoral votes in the general election. The main difference is that in all but two states (Nebraska and Maine), a state's electoral votes are all-or-nothing. You either get all of Ohio's electoral votes or none of them. That's not the case with delegates, a fact conveniently ignored by many of those same sites last week so they could run stories about Clinton "winning" Iowa despite a very small margin. "Winning" a state in the primary doesn't actually mean much because the pledged delegates get split. Hillary "won" Iowa, but it only means she got 2 more delegates than  Sanders, which is some infinitesimally small percentage of the 4,763 delegates up for grabs.

The other difference between primaries and general elections is the inclusion of superdelegates, of which there are a little over 800 this year [Correction: apparently it's 712. I thought 807 for some reason, but didn't confirm (which is why I gave a ballpark figure)], including both Bill Clinton and Bernie Sanders himself (so we know Bernie's getting at least one superdelegate). Unlike the pledged delegates, the superdelegates aren't obligated to vote for a specific candidate. They can vote for whichever candidate they want to support. The DNC can't tell them who to vote for, and therefore can only "award" them to Clinton in the sense of announcing how many of them have expressed support for Clinton.

That being said, about half of the superdelegates are elected members of the DNC, most of the rest are democratic governors and members of Congress, and a handful are "distinguished party leaders" that are hand-picked by the DNC (and presumably includes former Presidents like Bill Clinton). In other words, the superdelegates are mostly party loyalists who will probably vote for the candidate that the DNC wants as nominee. While the inclusion of superdelegates certainly can subvert the will of the voters, that's kind of the point. The idea is that superdelegats are there to provide a check against the possibility that a popular but "unelectable" candidate will win the nomination. Just like with electoral votes, the subversion of the popular will is a feature, not a bug (at least according to the "distinguished leaders" who put the system in place).

Want me to explain more things you should be able to find out on your own? Support me on Patreon!

Posted by Steve Johnson at 6:16 PM No comments:

So apparently this is going on in response to something that happened at a football game: 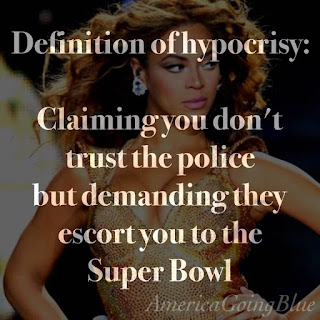 If Beyonce (or the Black Lives Matter movement) were saying that the problem with the police is that they're incompetent dullards who are so racist that they instantly shoot every minority they encounter, this may be a valid criticism. Of course, Beyonce hasn't said that. She's expressed concern that the police have a tendency to deal more harshly with minorities, which frequently leads them to murder unarmed people. When this happens, they almost always get away with it and usually keep their jobs. Beyonce knows that she can rely on the police to escort her to the game without shooting her because they all know she's Beyonce. Her criticism have to do with the fact that if her husband takes a walk in the wrong neighborhood at night without some obvious way of signalling he's fucking Jay-Z, he's more likely to be stopped by the police than a white guy. If he says or does anything to spook the apparently very-easily frightened (if their accounts of these situations are believed) cops involved, he's more likely to get shot than a white guy, and the officer who did the shooting is less likely to be prosecuted than if he'd shot a white guy (though not by much; the police get away with murdering white people a lot too, but a cop who shot a white guy as famous as Jay-Z is would at least lose his job). But yeah, that's basically exactly the same as claiming the police just go around randomly shooting black people for fun.

Posted by Steve Johnson at 6:25 PM No comments:

Someone one Facebook asked Bernie supporters to explain how all this "free' socialist stuff is going to work if Sanders gets elected. I posted this wall of text in response (I said I was sorry). I figured I'd post it here for anyone who's interested (and for Bernie supporters who need to be reminded that President Superman isn't a thing that will ever happen). And yeah, I realized after typing it that "people who are really into curling when the Winter Olympics are happening" would be a better analogy than Superbowl Sunday-only football fans, but I don't have time to change it at the moment.

In all likelihood, Sanders isn't going to get most of what he wants accomplished. Contrary to the rhetoric that happens every four years, The President isn't very powerful for reasons Justin's already mentioned. With Democrats, the cycle is especially vicious because they're sort of like the people who are huge fooball fans on Superbowl Sunday and never watch a game the rest of the year. There's probably also some discouragement over the fact that all the things that the Messiah of the moment promised during the campaign aren't happening. In any case, Democrats don't show up for the mid-terms, the Republicans take (or keep) control of Congress, and the corporate media tells us that the mid-term elections are the American public showing that they don't want Democratic policies. Achievement unlocked: Stats Quo Maintained.
To answer the original question, most of Bernie's programs are funded by raising taxes on those who make over $250K, closing off-shoring and hedge fund loopholes, and taxing Wall Street trading (which might also reign in the kind of casino gambling that caused the 2008 crash). His medical plan also pays for itself by forcing drug companies to negotiate with the federal government and implementing single-payer, which cuts out the overhead private insurers spend on advertising and CEO pay. Taxes will go up, but you won't have to pay insurance premiums if you want health care, so most households will pay less overall.
But none of that's going to happen during Bernie's term, so why vote for him? There are a couple of reasons. For one, change can happen if there's enough popular support. Many of the things Bernie proposes are popular. The problem is that there's a sort of gentleman's agreement between politicians to pretend there's not popular support. If there's a vocal movement and the President makes it clear that the Congress is the bottleneck, it can scare Congress into acting to keep their seats (or get voted out if they don't because there's enough of an uproar to convince people there's a Superbowl happening during the mid-terms). Sanders will use the bully pulpit so hard Teddy Roosevelt will come back from the dead to high five him.
Also, Sanders has said this isn't just about electing a president, it's about creating a movement. Most of the grassroots activity from a presidential campaign stops the day after the election. Sanders is trying to build machinery that will keep going after he's elected. I'm not really well-versed in the details, but apparently he's done it with his campaign machinery for lower offices, so hopefully he can repeat it here. Basically, he's playing the long game. He knows he might not get campaign reform or universal health care during his presidency, but he's trying to lay the groundwork for it to happen eventually.
And yes, Obama did make the same kind of promises only to continue Bush administration policies once he got elected, all politicians make big promises, etc. etc. The main difference is that with Obama, we were betting on a guy without much of a track record. Sanders has been pushing for the same things in different offices for decades, so I don't think he'll suddenly change his mind if he gets elected.

If I had some of that free socialist stuff, I'd have more time to edit. Until then, you can support me on Patreon.

Posted by Steve Johnson at 8:28 PM No comments: