Rivers Are Dicks and Should Be Boycotted.

For most of my life, I’ve thought of nature as an impartial force that didn’t judge people based on race, creed, gender, or any of those other factors that we humans use to compartmentalize others, usually to our own detriment. Earthquakes didn’t care what god you prayed to, tornadoes destroyed homes of people of every ethnicity, and hurricanes didn’t do credit checks. Then I found out I was wrong.

It started with Hurricane Katrina, when thanks to Kanye West I realized that the Mississippi River was a racist. Sure, Kanye blamed George W. Bush, but since the Dubya administration helped black people just as much as white people (ie., not very much), the only solution was that the river itself had targeted the homes of African-Americans while making sure its waters avoided the homes of poor white people (rich people of every color had the advantage of higher ground and the resources to evacuate, so we can’t really blame the river for classism). This realization caused quite a bit of cognitive dissonance for me; since the Mississippi was Jim’s road to freedom in The Adventures of Huckleberry Finn, I’d always thought of it as black-friendly, perhaps even a big, watery version of Harriet Tubman. I was also shaken by the possibility that Twain, one of my favorite authors since childhood, might in fact be little more than a propagandist for Big Water.

But that was just one river. Surely our mighty Ohio wasn’t as petty as its neighbor...or was it? During the recent flooding here in Western Kentucky, I found out that while the river has no apparent racist tendencies, it does discriminate based on class. But first, some background.

For those of you who don’t know, our fine city decided to go ahead with the annual American Quilter’s Association show despite massive flooding and wind damage that had led the city and many surrounding counties to declare a state of emergency. Some people worried that the show would use local resources and personnel that could be used to help flood victims. Some were afraid that traffic problems caused by a 50% population increase would slow down emergency and construction vehicles doing important work. Others were concerned about a possible flood wall breach, and what thousands of drowned quilters would do to our area’s reputation. Still others were against the quilt show even before the storms started due to the allegations of corruption regarding subsidies the show gets from the city or because quilters have a reputation for being low-tipping bad drivers with entitlement issues. The main concern about the quilt show, however, was that it fills up all the local hotels, leaving no place for locals flooded out of their homes to stay.

It’s the hotel thing that tipped me off to the Ohio River’s war on the poor. Nearly every time someone brought up the hotel room shortage on local forums, they were informed that the quilters’ aren’t taking rooms from locals because people who have lost their homes to flooding can’t afford hotel rooms anyway. This was shocking, since I’d always assumed that flood waters devastated anyone on low ground regardless of economic standing, but apparently the Ohio has chosen to bypass the homes of the wealthy. Now, I realize (thanks to many of those same upstanding citizens) that since poverty is a lifestyle choice the victims aren’t completely blameless, but I think we still need to hold the river responsible for its actions.

I think the only way to make the Ohio and Mississippi Rivers see the errors of their ways is a boycott. From now on, we’ve got to resist the urge to boat and ship cargo on them, fish or swim in them, and pump our chemical waste and sewage into them. I’d was going to recommend that we not even cross them, but someone pointed out that allegations of vampirism could harm the Anti-River Movement if we did that. Boycotting the rivers will be hard, but I truly believe it’s the only way we can teach them a lesson.
Posted by Steve Johnson at 9:23 PM 2 comments:

My pals Josh Burnett and Jeffrey Johnson recently posted their influence map on their blogs. The meme was started by fox-orian at deviant art for visual artists, but why let the guys who draw pretty pictures have all the fun? 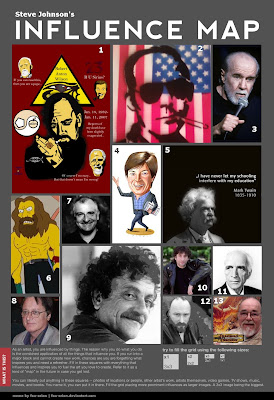 1. Robert Anton Wilson: I didn't actually discover St. Bob until I was in my early or mid 20s, but once I started reading his stuff, I didn't stop until I'd read everything I could get my hands on. His ideas about "maybe logic" and reality tunnels make more sense than just about any other theory I've heard, and his ability to see the absurdity of existence is unparalleled. Since RAW's got such a big space on the influence map, I decided to let him stand proxy for three guys who I didn't have room for: Greg Hill & Kerry Thornley (authors of The Principia Discordia) and Charles Fort (whose philosophy and humor are similar to Wilson's if a little dustier).

2. Hunter S. Thompson: This is another author that I discovered late but who's really influenced me. There are a lot of things to admire about Thompson the person, but the thing I love about Hunter the writer is ability to report on something without providing any actual facts about the reality of what he's reporting on.

3. George Carlin: I've been listening to Carlin since middle school, and count myself lucky that I got a chance to see him live when I was in college. Carlin's understanding of human nature and his incredible ability to dissect language is amazing.

4. Dave Barry: Obviously I'm a Dave Barry fan because he's an incredibly funny guy. The two things I love the most about his writing is his straightforward delivery and his subtlety. In amid all the obvious jokes, there are always a lot more that you've got to pay attention to catch. Barry's also a master of the callback.

5. Mark Twain: I think The Adventures of Huckleberry Finn was the first "real book" I ever read--I think in about 3rd grade--and I still haven't gotten tired of his books. I love his ability to combine subtle social commentary with a child-like sense of wonder and adventure.

6. Alan Moore: Alan Moore is just a genius at story construction. Some of his stuff is so amazing and multi-layered that I'm amazed anyone would think of attempting them, much less successfully pull them off.

7. Douglas Adams: Because sometimes it's ok just to have fun and let the story go wherever it wants.

8. Tim Powers: I've heard that before Tim Powers writes a book, he researches a handful of unrelated things that seem interesting to him. Then when he starts writing, he ties as many of them together as possible. It usually works out really well, and I've used him as inspiration for a lot of the secret history stuff we've worked into Hex products.

9. Kurt Vonnegut:I've always thought of Vonnegut as sort of Twain's natural successor, despite the fact that their writing is very different. Something in their attitudes just kind of makes me feel like Vonnegut took over the role that Twain played in American literature and culture, whatever that role was. So far I haven't found Vonnegut's successor.

10. Neil Gaiman:I think by friend and frequent co-writer Leighton Connor best summed up what I like about Gaiman: He's got an amazing ability to tie ridiculously fantastical elements into a very realistic world. I also love the fact that he does his research, even when most people wouldn't notice if he just made things up instead.

11. Fritz Leiber:I never really got into Tolkein, but can read Leiber's Lankhmar stories over and over again. I love the characters; both their moral ambiguity and the fact that ultimately it's the dynamic between them that makes the stories work. The treasure, magic, monsters, and adventure are just backdrop.

12. Warren Ellis: Ellis is just my kind of bastard.

13. E. Gary Gygax: A lot of my writing is in the role-playing field, so I've got to include Gygax even if my views on what makes the hobby fun seem to be radically different from his.
Posted by Steve Johnson at 6:27 PM 1 comment: