A lot of people on all parts of the political spectrum have been cheering the angry mother in Baltimore who wasn't happy to find her son participating in the uprising there.


I can't help but wonder what the reaction to this video, particularly from those on the Right, would have been if it had taken place in any other context. Would the same people be cheering this woman as a good mother if the scene took place on the same day in any city but Baltimore? I suspect a lot of the same people would post the video, but I have a sneaking suspicion that the comments would not be about this woman's parenting skills.
Posted by Steve Johnson at 2:26 AM No comments:

This clip from a while back has showed up a few times in my assorted feeds. It seems timely.

Posted by Steve Johnson at 11:46 AM No comments:

The Intercept has some letters between writer Deborah Eisenberg and PEN Executive Director Suzanne Nossel regarding the decision to give the PEN/Toni and James C. Goodale Freedom of Expression Courage Award to Charlie Hebdo. Nossel's response occasionally comes close to the all too common tactic of equating criticism of speech with support for suppression of free expression, but for the most part these letters provide a more nuanced version of the arguments on both sides of the Charlie Hebdo than a lot of the think pieces that have tried to squeeze the discussion into a binary narrative.

Although Nossel makes many valid points, many of them are defending against arguments that Eisenberg never makes. Even in light of the pro-Hebdo points that do hit home, I still find equating Charlie Hebdo's victimhood with heroism problematic. No matter how layered some of their satire may be, they still rely on unnecessarily racist depictions and have frequently printed cartoons (particularly those of Muhammad) that are gratuitously offensive to most Muslims no matter what secondary satirical purpose they may serve. Eisenberg sums it up well in her second letter:


But ridicule of Islam and Muslims cannot in itself be considered courageous at this moment, because ridicule of Islam and Muslims is now increasingly considered acceptable in the West. However its staff and friends see it, Charlie Hebdo could well be providing many, many people with an opportunity to comfortably assume a position that they were formerly ashamed to admit. This is not a voice of dissent, this is the voice of a mob.

Give it a read. It's a little long, but well worth the time.

Posted by Steve Johnson at 1:26 PM No comments: 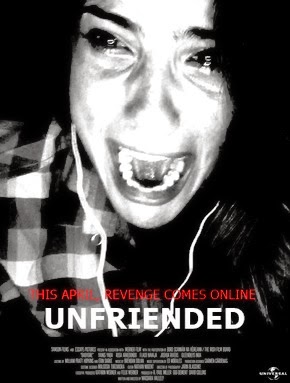 Since The Blair Witch Project bored us all to tears and/or gave us motion sickness, there have been hundreds of “found footage” horror flicks, most of them unwatchable. Unfriended, at least, offers a slight twist on the formula: Instead of constructing the movie around camera footage of some idiots walking around in the woods, the story plays out during a Skype session between some idiots in their bedrooms at home. I went to see it thinking there was at least a chance there’d be some clever use of technology as a means of storytelling.

Not so much. Once you know the basic premise, you can guess how the story plays out: background is established through Youtube videos and Facebook timelines, private conversations take place via instant messenger, and what little glimpse we get into the main character’s internal monologue plays out through website visits, Google searches, and possibly music selections, though the last one only really tells the audience that she listens to incredibly bland music. There are a couple of instances where computer glitches are used for spooky effect, but otherwise Chrome tab product placement is about as clever as the filmmakers get with the “it all happens on the desktop” premise.

The story is equally predictable. As you probably know from the previews, a mutual friend of the characters, Laura Barnes, committed suicide a year ago and now her ghost has come back to haunt them online. It’s pretty quickly revealed that the suicide was the result of online shaming. Since I had just finished Jon Ronson’s So You’ve Been Publicly Shamed the day before, this kind of piqued my interest, but the film doesn’t really supply any interesting commentary or subtext (this is very much a “just text” kind of movie). Anyway, Ghost Laura is back for internet-driven revenge.

Since Laura took herself out after after her darkest secret (that she got drunk and shit herself) was revealed online, she’s getting her revenge by revealing the other characters’ darkest secrets to one another. Which brings us to another problem with the movie: all the secrets are incredibly boring, high-school gossip kind of secrets, in part because the characters are so boring and two-dimensional. The characters are so shallow that only one of them (the geek) is individuated enough to count as a stock teen movie archetype. The others are only slightly more distinct than “high school girls #1-3” and “high school boys #1-2.” The format and the decision to tell the story through one desktop (presumably to keep the audience from getting confused about who’s the current POV character) provides some excuse, but it’s a weak one since the Skype conceit allowed them to put actors on the screen. If the movie took place 15 years ago and we only saw the character’s ICQ messages, the flat characters would be a lot more forgivable. This is just weak writing.

Perhaps unsurprisingly, this is not one of those horror movies where creative or spooky carnage makes up for other failures. Apparently, Ghost Laura kills people either by possessing or mind-controlling them into offing themselves with whatever’s lying around, and most of the death scenes use the “you can only see what the webcam can see” premise to cover for the lack of budget and creativity. There are no spooky ghost effects, no really creative murder weapons, and no Final Destination bus-style “holy shit” moments.

Overall, it’s like the filmmakers came up with the hook and then half-assed everything else. The plot is predictable, but that’s not the problem. The premise basically allows for “actual ghost killing people” or “revenge hoax,” and neither would have been unexpected enough to count as a twist. The real problem is that they they told a predictable story badly. The idea of telling a story via computer screen is interesting in theory, but the novelty wears off very quickly. Once that happens, the only thing to hold your interest in is the ever-lessening hope that the filmmakers have another clever idea up their sleeve. They don’t.
Posted by Steve Johnson at 6:50 PM No comments: